- October 03, 2011
The word horror gets thrown around a lot these days. It takes a dozen sub-categories just to describe the most. For that reason I thought I would do a few short pieces on what definition I would give to the term Horror Film and some of the things they offer the hard working movie fans!

With Zombies, Creature-features, Psychological, Supernatural even Thrillers, it is very difficult to come up with something definitive but from my experience, Zombie films are great fun but never really scary. Creature-features are always tongue in cheek. For me, the scariest are the supernatural and psychological Thrillers. Sorry to anyone who is wondering where Vampires fit into this. A very simple explanation, they are not Horror films, never have been but with the recent spate of Dawson's Creek with fangs, they slip even further down the totem pole.

Part 1: Zombies: A personal favourite of mine and one that offers so much entertainment. From the greats of cinema like Night of The Living Dead and 28 Days Later to the laughable Zombie Strippers and not forgetting, my good old friend and possibly one of the best zombie films ever made, Shaun of the Dead. There is not much that can't be found in this world.

The genre that gave us this classic image of Zombie vs. Tiger shark in the brilliant Zombie Flesh Eaters, was the poor little brother of the horror world for so long. With the world fully embracing Slasher films, Zombies were left to gather dust on bargain shelves across the globe. However a recent surge has seen it thrust firmly in the mainstream and no longer resigned to mere Cult status. The afore mentioned Shaun of the Dead showed us that, while Zombies films have often had elements of comedy, they can be all out funny, kick-ass films too. The self proclaimed Rom-Zom-Com certainly tips the cap to George Romero! At the same time, breathes new life into the world of the undead by introducing it to a whole new breed of movie fan. 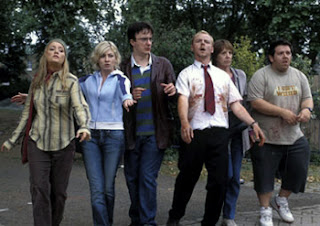 As much as films like Zombie Flesh Eaters and Shaun of the Dead help to strengthen the genre, we are subjected some total garbage too. Quite possibly the worst film ever made, Zombie Chronicles and others like House of the Dead and Zombie Nation are always there as a reminder of how bad things can get.

Although we have the good and the bad, what about the ones in the middle? The average chomps of meat? Well, that pool is rather full! Flight of the Living Dead dishes up over the top thrills and some good zombies. All played out on the deck of a passenger plane! What’s not to like?
We also have the numerous offerings from the Return of the Living Dead franchise. They can just to say keep their heads above water, or ground in this case! Rave to the Grave being one of those, somewhere in the region of the fifth installment. No matter how terrible it is, it will never fall as low as Zombie Chronicles!

The Zombie world has been treated to a few remakes or reboots. With varying results it must be said. While Day of the Dead did nothing to compliment the original, Dawn of the Dead was done so well, it might just surpass its daddy! Day, starring Mena Suvari and Nick Cannon offered very little in the way of retelling a classic story or even putting a new twist on it. Dawn however does both and it does them brilliantly. Perfectly capturing the essence of Romero's original. With some great moments of it's own... One being the sniper taking out the celebrity look-a-like zombies from the roof of his gun shop! Pure Awesomeness

The new breed of the undead are smart, intuitive and FAST! 28 Days Later not only gave us one of the creepiest openings to a film, it also gave the infected super speed and unrivalled aggression. Gone are the slow, lumbering shells. Replaced with flesh hungry predators! 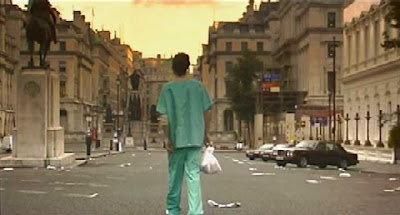 No matter what the future holds for the Zombie film, whether we will see re-makes galore for years to come or continue to marvel at the strange world born on to us from Haitian voodoo roots and stories of zombie slaves? Wherever it takes us, we have a great back catelogue which we can always call upon in our hour of boredom!

So in conclusion, I am not sure we can really call Zombie films Horror. I personally think the term "Zombie Film" says all we need to know. 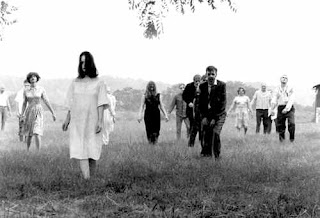 5. Shaun of the Dead

1. Night of the Living Dead