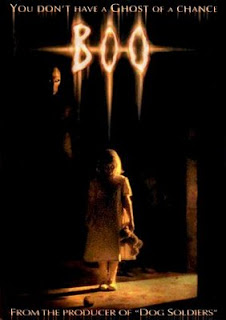 What can we say about another group of college kids stupid enough to spend Halloween night in a haunted hospital? I’ll tell you, why on Earth did I watch it twice?

Boo follows an unfortunate group of kids who decide to try and scare their girlfriends by rigging the local cliché, I mean abandoned haunted hospital with thrills and spills. What they don’t know is that the place really is haunted! Jessie, Kevin, Freddy and Marie make their way to the hospital which has been set up for the scares by Emmett. When they get there, Emmett and his dog have vanished. As they proceed through the house unaware of the ill-fated Emmetts misfortune, they discover more than they bargained for! Don't go to the Third floor!

Right, Storyline basics out of the way, Boo delivers very little in any department. Unfortunately, it extends so far that I think it even confuses itself. Absolutely no storyline to get involved in, zero characterisation and a script that makes little to no sense! As a viewer, I was sat wondering what was going on. First of all, we have the main characters, who have gone into the hospital for a bit of Halloween fun but we also have Allan, who has decided to sneak in to look for his sister Meg, who has been missing for two weeks (Part of the storyline that unfolds rather than rears itself in the beginning. The latter would have helped to build a bit of suspense but hey ho, I’m not a director) Anyway, Allan is joined soon after by Arlo, a former actor known for playing Dynamite Jones! Arlo now plies his trade as a cop and used to work with Allan’s father, apparently. Another part of the storyline which was raced over but if they had taken a little more time would have helped to build some level of characterisation!

As far as the acting goes, none stand out. And I mean NONE. They all believe the script about as much as I did and they delivered it with even less conviction! Wooden from the get go and I feel no empathy for any of them. The script itself is trying to be something it’s not. It may have worked well in a good “thinker” but not in a low budget horror flick like this one!

Through all the dust and debris, the only glittering beacon of hope can be found in the apparitions. Not all of them but the ones in the darkness and the shadows. When a flicker of torch light glances past a dark corner and we see the little girl ghost for example. That was very well done. Some however look like they are electronically charged or something but for the most part, the special effects are reasonably good. This leads me to believe that with a better script, fewer “main” characters and about 45 minutes cut off the running time Boo would have been a good film. As it is, I will not be watching it for a third time but it stands as a great example of why low budget horror movies should stick to what they do best! Deliver all the above without the involvement of complicated storyline and dialogue!