A cold night in Y2K 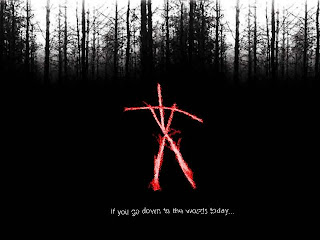 It was a cold, dark night in North Yorkshire when I stumbled into my local none descript video rental shop to browse the latest releases. Back when it was cheaper to rent movies than it was to buy, DVD's were the latest (expensive) offering and as such, the VHS enjoyed a twilight period thanks to a massive reduction in prices.

It was during this very period that I found myself handing over £3.99 in exchange for the rental of The Blair Witch Project for 2 nights. I made my way home, turned all the lights off and got myself comfortable.

Having seen The Blair Witch Project previously at the cinema, I was fully prepared for the following 82 minutes but that didn't sway my initial opinion. It was as good the second time, if not better. I have found that this film seems to get better with each viewing. From the eerily simple opening to its breathtaking ending, it always delivers. The main things that get me though are the little sounds... The ones you couldn't hear in the cinema, or on that poor quality VHS. Sounds which can only be truly heard and therefore appreciated when heard through full 5.1 Dolby Digital Surround Sound!

As the film progresses, the three unfortunate filmmakers' feeling of  utter panic is perfectly translated and even though at this stage, everyone knows that it was all a publicity stunt, we still feel empathy for Heather, Mike and Josh. Three brilliant performances from three unknown faces. Sheer brilliance on the film makers’ part and the publicity was beyond anything we had seen before. Love it or hate it, no one can deny the timeless effect and originality that The Blair Witch Project brought to the table.

Maybe Cannibal Holocaust was a forefather to The Blair Witch but where that one failed, Blair Witch succeeded. Unfortunately for every film that followed, using the internet in the same way was out of the question. The world would need a new kind of originality to surpass the efforts of this film!

So now that we are clear on that, I will continue... Once the camera had fallen and Heather had stopped screaming. The rolling of the film was the only sound left before..... Silence. As is always the case, I sat. Rooted to my seat. Even as the credits scrolled up the screen, I couldn't bring myself to reach over and illuminate the room by switching the "big light" on. So I sat. Waited, in the hope that when the credits had finished, the VHS would kindly rewind itself ready for me to return to the video shop.

A flicker, light... Beyond the final credits was some kind of life. What followed was 7 minutes that would stay imprinted in my mind from this day until the day I rediscovered it while trawling through You Tube.

Horsehair. A brilliant surreal black comedy which after a tiny bit of research (and reading what they wrote on their You Tube description) I can tell you was made in Scotland in 1998 and had a decent run on the festival circuit. Directed by Duncan Nicoll and starring Alastair Mackenzie, Horsehair is follows the fortunes of Mick as he begins finding strange strands of hair in places you wouldn't expect. Very dark, funny and creepy all at the same time. Horsehair came as a welcome bright spot after the darkness of credits.

It seems so funny now that things in this day and age have come to a point where I can say; to see what I saw over a decade ago and watch something which I thought was lost when the VHS died, check out Horsehair below. Hopefully you will enjoy it.