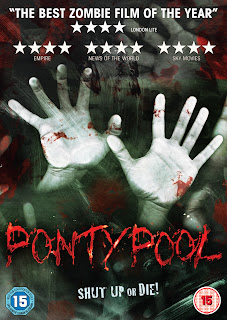 I got my hands on a great deal this weekend, 5 DVD’s for five Great British Pounds! Among them was this little gem of a zombie film. Pontypool, as well as being a town in Wales it’s also a town in Ontario, Canada and it is this town where the film takes place. Let me ask you a question, have you ever wondered what other people are doing during an outbreak of a deadly virus? I mean the people we don’t see in the films? What about radio DJ’s? Ask yourself, what would a radio DJ do if word reached him that an outbreak of some description had infected the small town he inhabits? Well, imagine a genuine War of the Worlds broadcast meets Dawn of the Dead and that is somewhere close to what Pontypool brings to the table.

Grant Mazzy, a radio DJ arrives at the studio in time for his early morning show. En route he had a very bizarre encounter with a strange woman who approached his car. When he got out to ask if she was ok, she had vanished. After very little time is spent dwelling on this rather peculiar incident, he continues on his commute. Mazzy is joined at work by Station manager Sydney and techie Laurel-Ann. It must be said that Mr Mazzy has impeccable taste as upon arrival he receives a bottle of Glenfiddich, my favourite whisky. Presumably as a means of staying awake, he will systematically swig on the fine single malt throughout his morning announcements.

The morning begins very much as usual. Not a lot seems to happen but after a few strange calls from the weather and traffic reporter Ken. Grant almost prays for something to happen. A performance from a pre organised theatre group does deal out a few laughs but more importantly it provides us with our first odd scene as one of the young performers utters some very curious things with an extremely vacant expression across her face. Grant is clearly intrigued but no one else seemed to notice.

A further call from Ken and things definitely take a turn for the worse. He describes what he is seeing and the more he talks, the worse it gets. He describes a riot like scene in which people are dying all around. The carnage he see’s is cut short again as the call ends abruptly.

Although the action in this film is fairly limited, the idea is driven into our consciousness from the outset and it all adds to the feel and suspense surrounding the small church they use as a radio station! As gory as it has to be without being mindless and a great script give the viewer a great treat. Grant Mazzy as the DJ played by Stephen McHattie is brilliant. He is joined ably by Lisa Houle, who plays Sydney and Georgina Reilly as Laurel-Ann. All three basically carry the film from the start and we get a great feel for the characters in such a small enclosed place. The whole feel of the film is very intimate and claustrophobic, with 99% of the visual film from inside the same few rooms.

Although the film is not necessarily a zombie film, it does share the same characteristics as most. It follows an epidemic/virus which has infected the mass populous of the town in question. Quarantine arrangements are attempted and the infection continues to spread. The difference here is the infection seems to be spread via the spoken word. A very original concept but one which takes a little to grasp. Almost like natures revenge in M. Night Shyamalan’s The Happening, because it is so original, it almost seems implausible. I know, I know strange choice of phrases for a zombie film, after all, any zombie film could appear implausible but because we have grown up with and seen so many, we accept them within the realms of possibility much like alien or paranormal films. Somehow though with the idea of a linguistic virus, it takes a little bit more to accept but with time to fully understand and comprehend the logistics, it somehow makes sense.

Originality alone are enough to warrant a second viewing but with the production, acting, story and dialogue all playing major roles in creating a great film, it deserves high praise indeed. I cannot recommend this film enough. Any fan of the genre would enjoy and hopefully appreciate Pontypool for what it is. I am more than happy to list Pontypool as one of those rare gems found in the depths of despair otherwise known as the bargain bin! This just proves that they do exist!