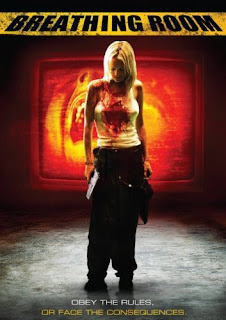 Following on from the last film I watched which was the extremely enjoyable Frozen. I was feeling slightly less excited about the next. It came in the shape of Breathing Room. As usual, a quick glance on IMDB gave me a brief overview including the stars or lack of whichever the case may be. The lead in this film goes to Alisa Marshall who has had a few bit parts but for the most part remains an unknown. It also stars Michael McLafferty, again small bit parts here and there but he plays the immediate interest to Marshall’s character. It isn't difficult to see where the film will go!

Directed by Gabriel Cowan & John Suits, a partnership which between them would ultimately bring us the rather directionless and flat Growth in 2010, Breathing room follows Tonya (Marshall) as she is thrust naked into a room with a dozen other people. With no recollection of how she got there, Tonya along with the other inhabitants of the room must piece together the clues in order to survive. Sounds fairly normal, almost like a fun game? Wrong... The twist comes in the shape of large metallic collars positioned around each persons’ necks and a large sign on the wall which doesn’t make for good reading.

“Congratulations! You have been selected!
Prepare for the experience of a lifetime!
Players must follow all the rules to avoid penalty”

It isn’t long before the group see a demonstration of said penalty and it soon dawns on them that this is all too real. The group, who had previously been known only by the numbers assigned to them must now get to know one another and try to find a way of surviving this nightmare in which they have all been thrown into!

With a lot of people sighting similarities to the saw films, Personally, I can see more of the Cube series in the Breathing Room or even The Killing Room. All “contestants” are enclosed in a room with few clues of how to get out or even how they arrived there. All the while being monitored via camera’s which as we saw in Cube Zero was the same scenario.

As we get an increasingly good perspective of the kind of people they are, we are also plunged further and further away from the realms of creative entertainment. I was perplexed by the blindness of the twists and turns that besiege the last half an hour or so of this film. Ultimately I wasn’t so much scratching my head at what had happened but I was more asking the question of why? The similarity drawn with The Killing Room makes for good arguments against Breathing Room. At least The Killing Room had a plausible storyline. The ultimate goal of the organisers in Breathing Room are somewhat vacant or to put it more simply, nonexistent!

While it didn’t really make for enjoyable viewing, I wasn’t exactly climbing the walls trying to get away. Just as it was with Growth, the whole direction of the film past a certain point was very much irrelevant and somewhat poor. One piece of advice to messrs Cowen and Suits from someone with zero film making experience would be; Take a good long look at the screenplay before making these films. Up to a certain point both Breathing Room and Growth were very promising and then something happened somewhere in the middle that just made me want to scream! Good start – Bad ending! All I can say is “I can see what you tried to do there!”