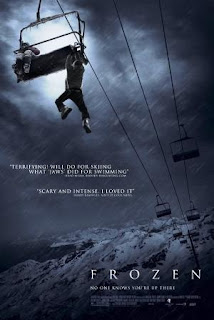 Well, it’s been a while but after a well deserved holiday, I was back to the wonderful world of horror this week. My first stop back in the UK was to my trusted DVD retailer, where for the [usual] bargain price, I picked up a few new additions. First up was a film which although I had previously heard of, it was yet to find a place in my DVD player.

The start of the film introduces the viewer to the three main characters very well in a short space of time. It shouldn’t always take an hour to establish a base and provide the viewers with empathetic feelings towards the main characters. We follow Lynch, Parker and Dan as they spend the weekend on the slopes. It gets dark very quickly and the weather soon starts to turn, the three decide that this would be a good time to go for one last run. After sweet talking the chairlift operator into letting them ride, they set on up the mountain. A calamitous mix up between the operators leads the three to be stranded in mid trip. Once all the lights turn off, they realise that they might be in for a long wait!

Although the premise is very simple and is comparable to that of Open Water, it is very well executed. The suspense that is generated by the director had me on the edge of my seat for most of the film. The Director in question is Adam Green who gave us Hatchet and its sequel. What Green manages to create is an ultra stylish, suspenseful thriller with only nature to fear. As the three kids sit trapped about 50 feet up, their feet dangling down still with snowboards or ski’s attached we do have an overwhelming feeling of claustrophobia despite the fact that in reality they are out in the open.

Their predicament made worse by the oncoming storm, they try desperate measures to free themselves from their icy prison. The first such act comes when Dan attempts to jump in order to get help. This attempt goes disastrously wrong and as such sets the tone for the rest of film. Without giving too much away, the result of Dan’s jump is gut-wrenchingly graphic and made me squirm! I will say however, it gets worse!

The three actors tasked with carrying this film are Shawn Ashmore who plays Lynch. Ashmore is perhaps better known for playing Bobby the Iceman in the X-Men films. He does have his place in the random horror arena with roles in films like Solstice and The Ruins, he also has an uncredited appearance in Adam Green’s very own Hatchet 2. Kevin Zegers who plays Dan again has roots in Horror, he is probably best known for his role in the Dawn of the Dead remake, he also appears in Wrong Turn and alongside Nick Carter in the dross retelling of the tale of the Headless Horseman film, The Hollow. The three rounded off by Emma Bell, following on from Ashmore and Zegers, Bell has appeared in Final Destination and the brilliant Zombie series, The Walking Dead. She also, like Ashmore has an uncredited role in Hatchet 2!

The whole feel of the film is very good and atmospheric. The thrills are in full flow once the film gets going and the acting is brilliant. All the pieces fall into place and as the film plays out, I for one was not only very impressed with what I saw but also extremely concerned about the health and safety procedures of ski resorts!

A good film from start to finish and one which I am confident in saying, I will watch it again. I would thoroughly recommended it and if you liked Open Water then Frozen is a MUST see film!