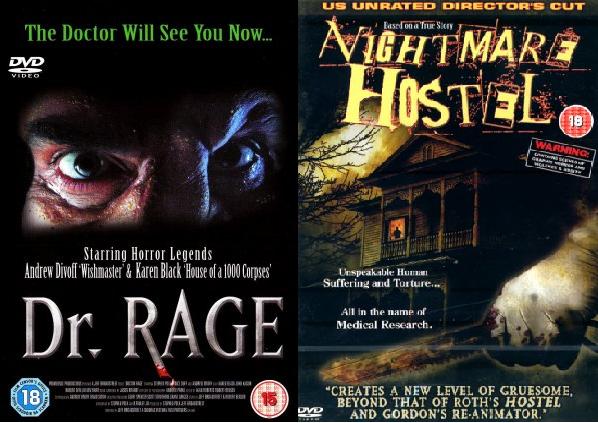 Viewers beware!! If you have seen a film called Dr. Rage, please do not waste your money by buying this film. You will only find yourself, like me sat with two copies of a very poor film!

Let me start this review by comparing the two covers. I know this scenario probably happens a lot in the world of Random Horror but this is the first one I have reviewed so here we go.

Dr. Rage was a DVD I purchased a few years back, watched it with the misses and was overwhelmingly underwhelmed with the film itself. The cover is fairly standard, tagline read “The Doctor will see you now!” and the cover also boasted the accolades of the cast. “Starring Horror Legends, Andrew Divoff ‘Wishmaster’ & Karen Black ‘House of 1000 Corpses’”. The picture is a standard screenshot from the film itself. Although I am not quite sure if Divoff and Black could really be classed as Horror Legends? Rather people who appeared in Horror Films, not even great Horror films at that! The whole picture is topped off with the standard BBFC certificate of 15. In conclusion a fairly simple, effective and thrifty presentation. Put it this way, it was enough to make me buy it albeit for £1.99!

Nightmare Hostel paints a different picture though! My first glance was stolen by the big banner at the top which reads “US Unrated Director’s cut”. Further perusal led me to another text box advising “Warning: Contains scenes of graphic Horror and Violence & Nudity”. Various taglines also continue the fabrication reading; “Unspeakable Human suffering and torture” and “All in the name of Medical Research”. So, a few points to make before we go any further, firstly the film features neither scenes of graphic Horror or violence and the nudity is hardly enough to warrant the 18 classification that it has been upgraded to and secondly Unspeakable Human suffering and torture is a huge stretch of anyone’s imagination! After all this, you would be forgiven for thinking that enough has been done in an attempt to sell this as something else but you’d be wrong. Two vitally important things stand out further than anything else! Firstly the main picture depicts an old looking colonial style house with someone stood in the window, maybe hinting that this is set in a now discredited asylum of some sort... NO! The house pictured doesn’t even appear in the film! The whole film takes place in what looks like an old shop on the street! No Pillars, no balcony, not even A HOUSE. Inset on this fictional house is some kind of hack saw which again DOESNT APPEAR ANYWHERE IN THIS FILM! As if that wasn’t misleading enough, slashed across the top of the films’ title reads the fateful words that is a sure fire way of selling any film..... “Based on a true story”!!

It is clear to see that the biggest change is the name. Obviously on the back of the success of Hostel, they decided that by including the word hostel in the title, it would encourage people to buy it. Even though there is no sign of any hostels anywhere in this film!

I almost forgot I was reviewing the film for a moment there. Nightmare Hostel starts off with a rather odd scene in which our protagonist is seen by many witnesses to be assaulting a bum in the street. From our perspective we can see that it is in fact the homeless man who is a little bit crazy and it appears differently. Anyway, with that rather uninteresting opening, Michael (Stephen Polk) is given a choice. Face criminal charges and jail time or subject himself to an experimental medical trial. He obviously chooses the trial unbeknownst to him that the person running it is a crazy, unaccredited doctor! It isn’t long before he wishes he’d chosen jail!

While the storyline is pretty standard stuff, the script is atrocious. There is about as much sense in this script as there is in developing an underwater towel! It doesn’t flow from scene to scene as most films should, instead it bounds from one point to the next with no connection to the previous point. Characters are practically written out of the film by the lack of any meaningful script although with the acting on display that is probably not such a bad thing. The evil doctor (Dr. Straun) in this instance is played by so called “Horror Legend” Andrew Divoff, I say played what I meant to say was he turned up and read his lines! His ridiculously pointless partner/nurse is played by Denice Duff who hasn’t really done anything of note. Another stereotypical character appears in the shape of John Kassir who plays Moebius, the dim-witted assistant in the mould of Igor. Kassir actually has a fairly impressive credit list considering this role. The cast is joined by another “Horror Legend”, Karen Black who plays Molly, Michael’s boss or attorney, I didn’t quite figure it out but anyway, she has about 2 minutes on screen and contributes to one of the most poorly acted death scene’s I have ever seen! All this is rounded off with a duo, Robert DiTillio and Ken Ward who together play Junior and Larry. Conjoined twins and son(s) to mad Dr. Straun.

With the ineptitude of the cast and script coupled with the total lack of any noticeable coherence, I looked to the gore for some sort of positivity. Alas, nothing! For a Random Horror film that promised so much with tales of Graphic Violence and gore, Nightmare Hostel delivered nothing more than weak, almost made-for-TV standard stuff! I know I tend to get a bit carried away when giving bad reviews but I give them so rarely it just makes me wonder at some people. Films can have promise and class on a shoestring budget so why not some? Why are some films so over the top bad that the world would be a better place if they had never been made? Who knows, that is one of life’s little quandaries.