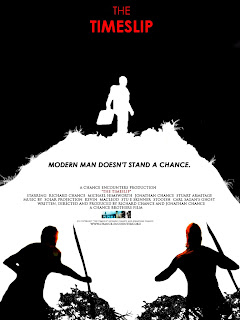 Although this is less of a horror film and more of a sci-fi, the opportunity to watch and review a film which was sent to me by the co-director/co-producer/co-writer, Jonathan Chance was too good to pass up. Especially considering the last short that was sent to me by a director/producer was the brilliant Familiar. Anyway, Mr Chance is one half of movie makers, The Chance Brothers, who also appear in the film, they have created a very quaint, suspenseful thriller which is enjoyable and thought-provoking in equal measures

A businessman walking through the streets of London, suddenly finds himself flung into the unknown without warning or reason, he is transported to a scarce, barren land of an unknown location. One can only assume that he has somehow found himself in another time!

He frantically searches for some explanation or even a sign of where he is, without success. It isn’t long before the elements begin to take their toll and he must now battle for his own survival.

The story grows and as it reaches its peak, a whole new problem presents itself as he is stalked through the woods by a presumably primeval group of men.

As I said in the beginning, this film is not really a horror but it does play with some great idea's, one of which being the utter feeling of panic that would be felt if you were thrust into a similar situation. On one hand, you are initially asking how but before long thoughts of why, where and eventually....When! Personally the feeling of solitude would be enough to make me give up but our protagonist fights on and on until the climax of the film, which you will have to just watch for yourself!

With a production value much higher than most shorts and a great story, The Timeslip is a great example of what can be achieved with the right ingredients, you don’t even need lots of money or fancy special effects, sometimes it just works. If you get a chance to see this exciting little short film at any festivals etc, I would certainly recommend it.