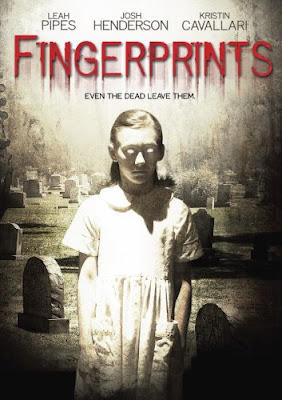 Let me set the scene. I am stood in my local DVD retailer and I’ve just realised I have accrued enough points to warrant a free £10 in store. After perusing the latest releases, I decide that the smart money would be spent on a few more Random Horror films instead. One such film came in the shape of this talkie from 2006!

Although the film has all the clichéd hallmarks of a lower budget horror/thriller, it is not without its charm. Starring Leah Pipes, Kristin Cavallari, Josh Henderson, Andrew Lawrence and the one and only, Lou Diamond Phillips. Fingerprints starts with the horrific scenes of a tragic bus-train accident in the 1950’s in which a lot of the town’s children lost their lives. The story jumps forward to present day where we are introduced to Melanie (Pipes) and her sister, Crystal Cavallari).

As the film goes on we establish the “clichés” the love interest, Penn, played by Josh Henderson and the joker Mitch who is well played (for the most part) by Andrew Lawrence. Lou Diamond Phillips is introduced part way through the film as teacher and Counsellor, Doug. His relationship with Melanie provides yet another horror cliché but one which is standard enough to pass by without complaint.

The basic storyline features a local tale in which stopping your car in neutral in front of the rail crossing leads the ghosts of the ill-fated children to push you over the rest of the way. A tightly wound conspiracy begins to unravel itself as Melanie begins seeing the ghost of one young girl called Julie. As usual no one believes her, so she must solve the problem herself.

The characterisation is perhaps one of the better aspects of the overall film with some great contrast provided by the sisters themselves. One is a brunette with a wild past and a bit of a loner while the other is your typical ditzy blonde cheerleader who is friends with everyone. The two school friends come hand in hand with the sisters as Henderson’s Penn is the all American pretty boy and Lawrence’s Mitch, a bad boy with no restraints!

To pull the whole thing into place and something that I found a bit unnecessary was the treatment of Melanie by her mother. Obviously Melanie has done something in the past but the way she is treat by her mum just made me want to punch her. In that regard, the character was very well played by Ginger Gilmartin (according to IMDB, her only credited role to date)

All in all, Fingerprints is a very solid film. From start to finish it kept me interested and with the exception of some poor special effects, it was very good. With a bit more cash spent on FX it could have been something completely different. Not to diss the Diamond but maybe if they had forgone his fee a bit more could have been placed elsewhere but then maybe it wouldn’t have got the production value without him?? Who knows? Either way, the film mixes some good ideas with some good acting and the overall result is a fairly decent and entertaining watch. Imagine Stir of Echoes mixed with The Ring and a bit of Scream thrown in for fun and that is what they were trying to achieve.