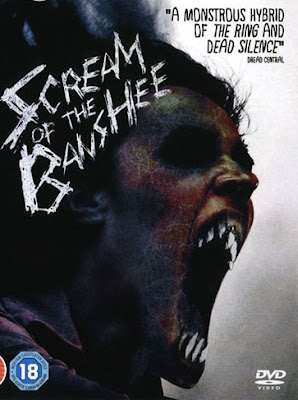 When you consider that the last After Dark Original I watched was the very entertaining Husk and before that, it was the previously reviewed The Task, I was expecting more of the same. Unfortunately, all I can say is I hope the next one I watch will be a marked improvement on this dull, lifeless and all round lacklustre attempt at a Horror Film.

Let me take you back a bit. I received The Task as a Christmas present and on the back of that I decided to get the collection of After Dark Originals. Having previously enjoyed various After Dark films including Penny Dreadful and Zombie Virus on Mulberry Street I knew that this collection of films would be one for me. I did my usual pre-movie research which includes reading the cover of the DVD and a quick look on IMdB to see how the rest of the populous rate it. After looking on the cover for Scream of the Banshee, I was filled with promise as I noticed the horror legend that is Lance Henriksen has a credit in this film. My thoughts were so-so on the inclusion of Lauren Holly, who I haven’t actually seen since Dumb and Dumber.

Anyway, to the film itself; as I said, all things pointed towards an enjoyable film but, it wasn’t long before that early promise was slowly vacuumed from my mind! Within minutes of suffering through Lauren Holly’s vapid portrayal, I was disappointed! As my philosophy on films is no matter what, I can’t turn a film off; I stuck with it in the hope that Lance Henriksen would hopefully provide some much needed depth and structure to the fast declining storyline.

The film itself starts with a Knight capturing a banshee in Ireland in the 12th century and trapping it in a box. As we skip forward to present day and for some reason that box has wound up in a school in America. Professor Maura Whelan, an archaeology professor who receives a gauntlet which is thought to be of 12th century. With the gauntlet was a map which shows the location of a secret room in the school. This room was quickly found and inside was the aforementioned box. Seems legit, right? I know!

Anyway, once they swiftly work out how to open the box, they are confronted with something none of them could have imagined. It slowly goes downhill from there!

The cast as a whole is poor, Lauren Holly plays the professor and her two assistants provide very little in the way of contrast or intelligence! Once we do finally see Lance, it is a major let down and quite frankly; they could have put anyone in that role and accomplished the same result! Actually, the best performance comes from the professor’s daughter, played by Marcelle Baer. As for the overall feel of the film, the editing was rather terrible. Each scene ending with an abrupt change in music made the whole thing feel like a really bad made for TV film! Special effects were not terrible but the costume/make-up on the banshee itself was weak at best.

As storyline’s go, this one was almost non-existent. The whole plot just seemed to happen! There was no struggle or hardship. Everything just appeared to be in the right place when they wanted it there! If that makes sense to anyone, good, I knew what I was trying to say!

If there was one good thing I could say about this film, I would say it. As some of you may know, I rarely give out bad reviews as I try to see the good in everything but there was very little charm in this effort. Unfortunately, there was not enough bourbon to glaze my opinion! As a collection, I would of course say you must watch this film but so far, this is the worst of the After Dark Originals. Watch this space for the next one!