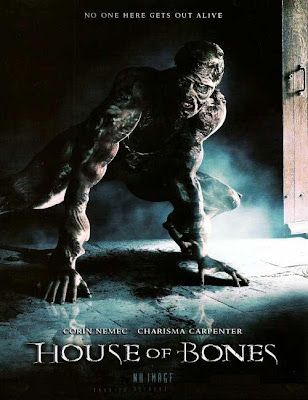 When you’re me and you see a film called House of Bones, you pick it up and without question hold it in your hand while you look for more films to buy. Then when you get it home and realise that it stars Corin Nemec and Charisma Carpenter, an eyebrow raises as you think to yourself, not bad. Could I have found one of those rare hidden gems here?!

The film begins with a flashback to the 1950’s and the (not so mysterious) disappearance of a young boy. Skip forward 60 years and we are confronted with a cheesy, TV style opening credits in which we are introduced to a few of the characters and the overall premise for the film. A crew of Ghost Hunters filming a reality TV show have chosen their latest haunt! It soon becomes apparent that this foreboding house known as The Wicker House may have more than just skeletons in the closet!

As I said before, the film “stars” Corin Nemec but I can’t help feeling that maybe he owed someone a favour. He plays the “face” of the show called Sinister Sites who, until the shows rating begin to dip, hasn’t done field work. The extent of his involvement has been to stand in front of a blue screen and talk the talk! His part is not extensive and if I’m honest, the film may have benefited from either; not including his part or altering it so it wasn’t such a “comic relief”. A relief that didn’t lend anything to the film, in fact, it sort of took away from the eerie feelings that are quite acceptably generated throughout.

The other name on the cover comes in the shape of Charisma Carpenter, readers may recognize her from the Buffy and Angel series’. In massively stark contrast to Nemec, Carpenter’s role is vital to the film and her performance only serves to increase the view ability. She plays a medium who has been employed to work on the show. Almost immediately, her spidey senses pick up on something sinister within the house!

While the storyline is fairly formulaic, it is well executed and very capably delivered by the cast. Of the cast, besides Nemec and Carpenter, Ricky Wayne plays Tom, the series’ producer. His role is fairly well played as is that of techie and paranormal investigator, Colin Galyean and Marcus L Brown respectively. The special effects for the most part were impressive, the occasional floating mist did very little to diminish the overall complexion.

As haunted house movies go there isn’t actually that much ground to be shook. The bar set fairly high by the likes of The Shining and Amityville, however each one tries and for the most part they fail miserably. House of Bones would find a nice comfortable place somewhere in the middle. Easy on the eye while not being incredibly original but that should by no means steer anyone away from watching what was a fairly enjoyable little horror flick.