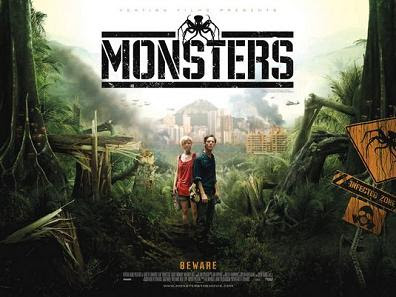 This film was first brought to my attention a few years ago while perusing my monthly copy of Total Film magazine. It wasn’t until recently that I finally got around to purchasing the film and giving it a watch.

I will start by saying, not far into this film, the misses and I were happily sat on the sofa watching the film and drinking some happy juice when from outside we heard some suspicious noises. I don’t need to tell you that with the current subject matter permeating our consciousnesses’, we were startled! We paused the film and stood in the doorway... Being that we are both from a town very close to an army barracks, it didn’t take long to deduce that the sounds were in fact those of soldiers close by running exercises!

Although Monsters is far from a horror film, I have been branching out to more genre’s recently and Sci-Fi is a personal favourite. Especially when the budget is low and the techniques used were so inventive. A statement that perfectly describes this film. Made with a budget less than $500K and with very little in the way of actual filming equipment, the writer, producer, director, editor etc etc Gareth Edwards used every bit of nit, grit, knowhow and any other trick up his sleeve to make this film. I am led to believe that they only had the two actors, Whitney Able and Scoot McNairy and all the extras who feature in the film were actually people they met on their travels and asked them to be in the film. For me, that is old school film making that needs to shown the massive appreciation that it deserves. Hats off to Mr Edwards!

The film starts in the aftermath of an alien invasion. A brief back story is described on screen but then we are invited to a world that is coming to terms with their situation. On the whole, people are getting on with life. Andrew, a photographer for a media outlet must help escort Elizabeth (his boss’s daughter) back to America. One thing leads to another and their only route ends up taking them through the dangerous “Infected Zone”.

With a slightly different twist on the standard invasion movie and the intrigue and wonder of the films transition from mind to screen, Monsters proves to be a highly enjoyable and brilliant sci-fi flick. The special effects, which were completed by Edwards himself using bog standard adobe software was a real selling point in this film. To look at them, it is very hard to believe that the film was made for the money it was. Some great imagery and a fantastically “genuine” atmosphere is also created, one which develops so well in fact, that towards the end of the film, I forgot I was watch a fantasy sci-fi and part of me believed I was watching a BBC documentary! That is something which is nigh on impossible to create with such an out-there plot.

It is very difficult to find anything negative to say about this film, so I won’t even try, all I will say is this; If you haven’t seen Monsters, try to watch it and if you have seen it and don’t agree with me that it is quite possibly one of the best sci-fi/alien invasion flicks out there then you’re watching the wrong type of film and I feel sorry fo you!