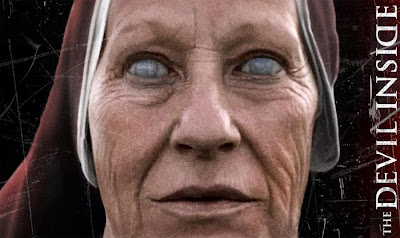 As anyone who is familiar with various other pieces I have written will know, I hate The Exorcist. With all the bad films I watch, all the low-budget, no-budget crap that passes through my line of sight, I still consider The Exorcist to be the worst horror film out there. Over-rated and extremely boring! If this opinion offends anyone, I implore you to make your case.... No, I’m right, it’s just 122 minutes of self indulgent tripe that sends me to sleep just thinking about it!

Rant over. While I didn’t enjoy The Exorcist or any of its sequels or prequels, I still opted to give Emily Rose a try... That didn’t really ignite my imagination either. While I have thus far skipped past The Last Exorcism, purely because of past experiences, I found myself watching The Devil Inside. I was instantly intrigued and continued watching. By the end, I discovered a new found appreciation for exorcism films in general and I am now adding The Last Exorcism to my list of “to Watch” films.

The Devil Inside follows Isabella Rossi on her journey to understanding the bizarre circumstances surrounding her mothers’ incarceration and subsequent transfer to a special unit in Rome. The film starts with a special news report chronicling the events of October 30th 1989 in which Isabella’s mother, Maria murdered three people during an exorcism which was being performed on herself.

Isabella, along with Michael, who is documenting the whole thing, travels to Rome. Not long after she arrives, she takes her mother’s case to two priests (Ben & David) who have decided to help her in understanding what is happening. Ben and David spend their free time studying and performing exorcisms which are unauthorized by the church, either deemed to be fake or other, they take matters into their own hands behind the church’s back and attempt to exercise the demons alone.

With the help of sophisticated medical equipment and video cameras to document everything, they first take Isabella to a work in progress. This proves to be the first real entertaining action of the film as we see what is perceived to be a real demonic possession in the process of being exorcised. The camera angles, while limited make the whole experience that little bit more “real” as we watch a poor woman contort and writhe, the initial feelings conjured are the kind that could only be fully described with a sound rather than a word but I will give it a go, OOEEUGHH!!! Obviously uttered with one eye half open, a huge squint and curled up nose.

That’s the basic gist. While The Devil Inside breaks no barriers in terms of plot or even production it has a lot of things going for it. Firstly, for someone who loves horror films but doesn’t necessarily want to invest hours into storyline and characters that ultimately mean nothing in this genre, The Devil Inside lasts almost 90 minutes, total runtime and in that 90 minutes we are treated to some great visual delights and some edge of your seat, intense and creepy action.

Like I said, it’s not going to be nominated for awards and most people may just read the poor reviews from the critics and dismiss this film but I would implore you to reconsider. I would definitely recommend this film as one to watch and although it somewhat steps on the toes of my Exorcist argument by being a fairly hyped “big” film, I thoroughly enjoyed every minute and if it wasn’t such a “big” film, I would class it a hidden gem. Enjoy.