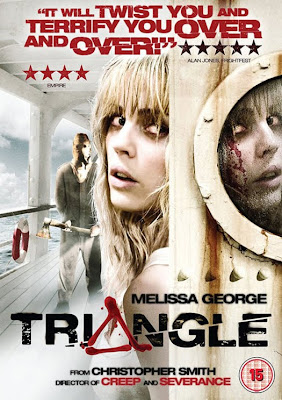 Triangle first came to my attention after buying something on Amazon. It was under the “Customers also bought” scrolling bar that often proves helpful in searching out the vast library of Random Horror films that are available. It wasn’t until a chance visit to a newly opened DVD/Games outlet that I saw the opportunity. £3.50 on Blu-Ray! Needless to say, I jumped at the chance.

It was this weekend, in the wake of Halloween that I decided to sit down with the misses and watch said film. Triangle is a 2009 thriller that stars Melissa George as Jess. The film starts with Jess at home with her son. Nothing untoward appears to be going on until the doorbell rings. When Jess goes to answer it, she is confronted with nothing. Your mind goes on and story continues...

Jess soon heads off to go sailing with some friends but before too long, a huge storm comes and threatens their lovely excursion. After some bizarre radio transmissions which seem to go unsolved, their boat is battered and capsized by the huge storm.

The group, originally consisting of Jess, Greg, Victor, Heather, Downey & Sally face the massive barrage head-on and somewhere along the way, one of them is lost. As the remaining crew sit in wait on the overturned hull, a huge cruise liner approaches. They board the liner and begin to look for the crew on a seemingly empty ship. More strange occurrences begin to plague the survivors as Jess begins to have vivid thoughts of déjà vu but things soon turn from bad to worse as it becomes apparent that the massive cruise ship is hiding something worse than they imagined!

I think I will leave it there as for anyone who hasn’t seen this film, I would not want to spoil anything for you. All I can say is the twists and turns in this eerily creepy, atmospheric and thought provoking psychological horror film will keep you on the edge of your seat for the entire runtime!

Triangle was written and directed by Christopher Smith who has previous pedigree with the dark and sinister Creep and again with the violent horror/comedy Severance. Both of which impressed greatly and he continues that trend here. As for the cast, Melissa George impressed more in this role than any other I have seen her in previously and she is more than ably backed up by Michael Dorman (Greg), Liam Hemsworth (Victor), Henry Nixon (Downey) and Rachel Carpani (Sally).

When it comes to this type of film, there is very little I can actually say besides compliments. A vastly deep and twist filled horror, I wouldn’t want to give anything away, so I will end with;
Triangle made up for some disappointing watches recently and although it didn’t fair too well as a commercial enterprise, I wouldn’t let that put you off if you were thinking of watching it. Highly recommended, original and enjoyable British horror film. It also raises an obscure yet poignant question of suicide but I’ll let you decide for yourselves....