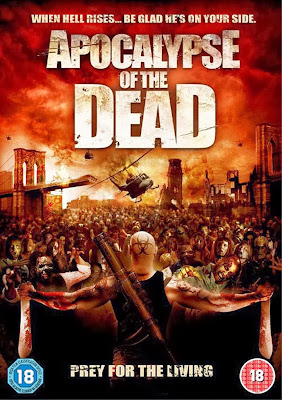 I have to admit that after watching Zombie Apocalypse starring Ving Rhames, I was somewhat dubious about another Zombie film with Apocalypse in the title and starring yet another genre legend. This legend comes in the shape of Ken Foree, Star of the original Dawn of the Dead. Thankfully, it wasn’t long before all my early doubts were eradicated!

As the misses and I sat to watch, I noticed that there was a lot of “…vićs” involved. A quick scan of IMDB and Wikipedia showed me the way. This film is perhaps the first Serbian Horror Film ever and as horror films go, it’s fairly good.

The film starts off with the customary intro into the infection, a burial site is discovered which is originally thought to be of plague victims, however through some manipulation and mutation, it actually revives dead cells. Skip forward a few decades and the release of this plague in modern day!

We are next introduced to the main characters and some semblance of a plot. Interpol agents are to oversee the safe transportation of a prisoner to the airport for deportation to London. Ken Foree plays Agent Reyes, on one last assignment before moving on. He is joined by rookie agent Mina Milius, played by Kristina Klebe. Along with Inspector Dragan Belic and Petrovic, they escort the transport vehicle. As a nice touch, one of the agents in the transport vehicle is called Agent Savini, just the first of several ‘tips of the hat’ to the greats.

Just as we are getting used to the characters, we are also introduced to a rogue hero, known only as Armageddon, he unleashes the wrath of the lord in a holy shit storm of muscle, guns and doomsday phrases! Armageddon is played by Vukota Brajovic, who in his native Serbia is quite the celeb. A well-known model who co-founded the production group Talking Wolf Productions. A production group set up to produce trash, Horror and action films (source: IMDB) As well as a starring role, he also produced and co-wrote Apocalypse of the Dead. On top of all that, he is known as the Serbian Schwarzenegger! How cool is that!?

Anyway, after witnessing a nun who’d been bitten, turn, Armageddon goes on a rampage. At the same time this is happening, our group of hero’s and the prisoner are struggling to survive on their own. Their struggle takes them through a highly infected area full of hordes of the undead just waiting to chomp on their flesh!

Once you get used to the mix of dubbed and English, you can really begin to enjoy this film for what it is, a fun, action packed zombie beast in the vein of Dawn or Day. Some creepy atmospheric scenes thrown in to tie the whole thing up in a nice little blood soaked box. At times, the settings are reminiscent of the original Resident Evil games. It makes the whole experience feel somewhat real. Unusual locale’s coupled with the whole feeling that everyone just up and ran make for a highly enjoyable zombie experience.

Most people would perhaps overlook this little title but I strongly recommend any fan of the genre to seek out a copy and give it a watch, Ken Foree provides the sense of familiarity and is just another bright spot on the whole production. As original zombie films go, this is nowhere near the mark but as a first attempt from the nation of Serbia, it is a brilliant start! There is hope for a sequel with Wrath of the Dead noted as being in pre-production with Foree attached as exec producer. Here’s also hoping that he receives another starring role as I would love nothing more to see a follow up with the same characters!