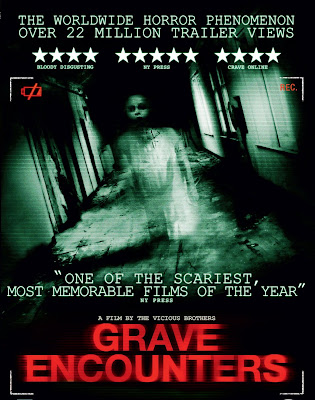 “Oh... Great” was the reply from the misses when I showed her the case for Grave Encounters! I know my wife well enough to know that she was being sarcastic and possibly, the prospect of watching yet another sub-standard random horror film was not as enticing to her as it was to me! Whatever the result, we sat, open-minded (I was at least) in anticipation and watched.

The DVD cover leads with the accolade of receiving over 22 Million trailer views, which I have to say in the world of film DVD’s is a first. Normally films are plastered with notable quotes from credible source’s and critics but not Grave Encounters. I suppose it’s the times we live in. Digital sales rule, VOD and other online sources show films and trailers readily and sometimes freely. In addition, to a certain extent, people couldn’t care less what Mark Kermode or Roger Ebert think of films, I certainly don’t (Clearly) but anyway, I was intrigued. Having not been a member of the 22 Million + strong crowd who had seen the trailer, I was excited with what I saw!

Like with most “found Footage” the film has a fairly slow start but it all adds to the tension as we are introduced to the characters: A group of filmmakers and experts making a TV show called Grave Encounters in which they try to capture existence of ghosts by spending the night in supposedly haunted houses. The latest instalment sees the crew staying at Collingwood Psychiatric Hospital, a long since abandoned hospital which was once the scene of horrific treatments of the patients.

The back story and the creepy introductions help serve this film very well as we are taken into the world presented to us with glazed eyes and an unquestioning acceptance that what we are watching is in fact real! The film also provides us with some comedic values as we are introduced to psychic medium Houston. Anyone familiar with Most Haunted will undoubtedly know the name Derek Acorah. Acorah gained a fair deal of notoriety for his work as a Medium in the UK. As I was saying, when Houston is seen off-camera mocking his own performance, it makes me think of Derek Acorah and all the bullshit he must laugh about when the camera’s stop rolling!

Anyway, back to the film... After the slow start, we get down to the nitty gritty. The caretaker having given his tour and now locks the crew inside their home for the night. Various night vision cameras are positioned as to give the crew a constant feed of the “hot-Spot” of activity which they hope will provide hard proof of the existence of the afterlife! It isn’t long before we are treated to some great scares and we soon realise that the crew are in for a night which literally will not end!

The style is such that even when nothing is actually happening on the screen, the suspense and anticipation are enough to keep the mind active. The cast are able and play their parts brilliantly, when working with a good script though, this is usually the case. Even though this is yet another found footage film in an age which expects more, I think it stands up tall next to the “best”! Massive comparisons can be found between this and The Blair Witch Project and with elements of House on Haunted Hill and Paranormal Activity (for obvious reasons) thrown in there, the originality is almost sapped from the film before it’s even started. It is this lack of originality which plagues so many films nowadays and only means the filmmakers have to try even harder to create something that stands it out from the crowd.

I think it is this reason alone which made me enjoy Grave Encounters so much. After being bored watching Paranormal Activity, I was waiting for this sub-genre to live up to the heights set by Blair Witch and this film comes closer than any other I have seen. In terms of Random Horror, thoughts are drawn to films like The Task and Hell Asylum but where they both impressed and gained favourable reviews from me, Grave Encounters is a cut above. To top it all off, it’s the first time I have chosen a film which has managed to really scare the misses, so to a certain extent, job done!

If, like me you found Paranormal Activity to be lacking a certain.....Everything! Then I would definitely recommend you watch this film. Brilliantly written and directed by Colin Minihan and Stuart Ortiz A.K.A The Vicious Brothers, Grave Encounters is certainly the scariest film I have seen since sampling the delights of The Blair Witch Project some 14 years a go! The only thing I can say after all that is: I can’t wait for the sequel!