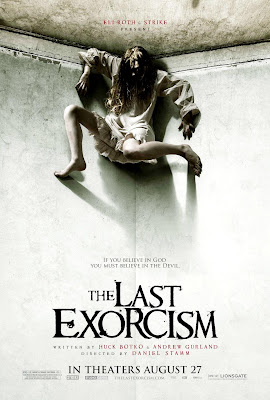 A few months ago I wrote about The Devil inside, a docu-style exorcism movie with all the feel of a real life experience. In it I wrote of my excitement to see The Last Exorcism, as from what I had read in various places, it all pointed to The Last Exorcism being far scarier and an all-round better film. However, after now watching both I have reached the conclusion that either our eyes don’t work as everyone else’s do or everyone else is just insane!

The Last Exorcism follows the story of Reverend Cotton Marcus who has become disillusioned with exorcism and almost his faith in general. He sets out with an access all area’s style film crew consisting of Iris (Filmmaker) and Daniel (Cameraman) to expose the worldwide scam of exorcism. After picking one request at random to answer, he uses this as his last case. He heads off to the town of Ivanwood to meet Louis Sweetzer, a farmer who fears his daughter Nell has come foul of something sinister!

We bought The Last Exorcism on Blu-Ray during one of my post-Christmas sale shopping sprees and I was anxious see what all the fuss was about. That anxiety was only heightened with the news a sequel was just around the corner, the rather ironically titled The Last Exorcism: Part 2. Anyway, we decided to dim the lights and give it a spin.

What we saw was approximately 60 minutes of good solid story and suspense followed by about 5 minutes of horror culminating in about 15 minutes of what can only be described by using the word blah! It was the latter 15 minutes that unfortunately will define this movie. While the story is solid and the characters are brilliant, the overall feel of the film for the most part was good if a little slow. The speed of the film was not that important because like most of you, I thought the suspense was all building to something mega!

Horrendously, the mega ending was enough to make me sick! A bad ending doesn’t always ruin a film but in this case, it did more than ruin it! It has left me with very little to persuade my original opinion that more often than not, this little sub-genre really doesn’t deserve the credit, acclaim or money that it seems to generate. The best bits of this film can be summed up by watching the trailer which is something no one wants to hear!

A slightly unnerving moment at the beginning when the crew first meet Caleb (Farmer Sweetzer’s son) is probably the highlight of an otherwise lame film. Some small comedic value is generated when the good reverend is performing his exorcism. Props, smoke and a tape player all lend to create the illusion of a genuine exorcism. It’s fairly enjoyable to watch but not enough to claw back much in terms of quality.

I would normally describe a film like this as forgettable but I never want to forget how bad the ending was just in case I accidentally watch it again! To make matters worse, I was waiting through the whole film to see some horrific contortionist/Crab walking magic, as pictured on the poster but apart from one scene in a barn, this didn’t really materialise.

Normally, I can recommend the worse films for even a smallest of reasons and this is no exception. I would recommend anyone to watch this film for one reason! So you can truly appreciate The Devil Inside for what it really is!