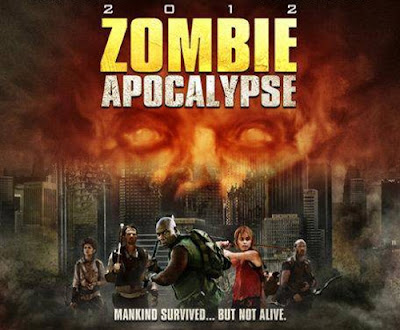 Well, here we are, the shiny New Year that is 2013 is barely old enough to crawl and the horror just keeps on coming. I hope you all enjoyed the holiday period. After a few weeks off with the family, I thought it would be nice to start with a film which I got in my Christmas box... Zombie Apocalypse!

I gave the misses a “wanted” list of Random Horror films to fill my Xmas stocking with and low and behold, I received them all (prepare for the reviews over the coming months). However, the first one from the stack we decided to watch was possibly one of the ones I was looking forward to the most, Oh how naive I was!

Zombies and Ving Rhames have possibly carried a “handle with care” warning due to the brilliant Dawn of the Dead being followed up by the abysmal Day of the Dead. Despite this, my expectations were higher than usual; Expectations which were only heightened by the inclusion of Eddie Steeples. Any fan of My Name is Earl will recognize the afro wearing “Crab-Man” and instantly I was hooked.

Feelings quickly changed as the film began! An adequate and creepy(ish) setting opened the film as we see our first Zombies and three survivors out for a morning stroll for supplies. Initial thoughts were so-so as the zombies looked impressive enough and the baron setting lead me to believe in the promised apocalypse however, and this is a big however..... The next on-screen gems came with the arrival on Ving himself and his band of merry men and woman. What follows is possible the worst CGI zombie fight scene EVER! Cassie, played by Lesley-Ann Brandt is a sword wielding mercenary who arrives with Henry (Ving Rhames). It is Cassie who provides the world of film with a new benchmark. Unfortunately, this benchmark is not one to be proud of. As a combo of character, actor and special effects this film is one of the worst I have seen in a long time!

The rest of the cast is made up with Taryn Manning, who plays Ramona, another survivor, who often looks out of place and the merry men of which I spoke, made up by Johnny Pacar and Gary Weeks. Pacar wasn’t so bad and provided much of the comic relief, he even appears in another film I received in my Christmas hamper called Playback.

I know that in most zombie films, characterisation is secondary to the gore but at least it is existent. In Zombie Apocalypse however, every time there is a chance of onscreen bonding one of the characters is killed. The director is blatantly playing with the rules of the horror genre and getting it woefully wrong.

Anyone who has ever read any of my previous posts may know that I rarely dish out bad reviews as my mantra is to see the good in all and while I will tear this film to shreds, it did have a few moments of good thrown in. Sadly, the best of these was the relief that came when the final credits rolled!

Every aspect of this film is poor at best, from the lacklustre on-screen performances to the dreadful script and not forgetting the special effects which I can find no comparison to. It was almost like they said, we want CGI but I also want it to look like a bad cartoon! A good example of the poor SE comes with the abundance of blood spraying all over the place, blood which never ends up anywhere near the cast or even the zombies for that matter! A second example and one which I feel almost unforgivable comes when Cassie is at the helm of a huge machine gun of some description. I am fairly sure that when firing a side loading repeater the bullets travel through as they are being fired? Or is that just my naivety again? Anyway, what a load of rubbish!

Following on from the worst CGI zombie fight scene EVER, this film also provides us with some quite unbelievable animal fight scenes. Arguably the worst example of CGI I have seen in a long time comes towards the end when the band of survivors is confronted with.... Dum Dum Dum (Musical effects there!) a Zombie Tiger! Yes, you read right. Some poor old tiger has been infected with a zombie virus and is now hell-bent on human flesh!

As Zombie films go, this is certainly not the worst! See Zombie Chronicles for that prestigious accolade but considering this film promised so much and delivered so little, I am loathed to dish out a poor review. Personally I am a huge fan of Dawn of the Dead and of Ving Rhames in general, I think he is one cool mutha’ but sadly this is way off the mark! If you love Zombie films, then you should watch this but only to give you a greater appreciation of the classics!