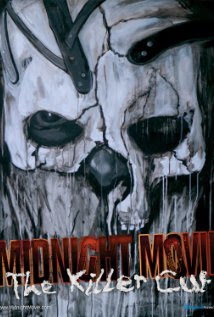 After receiving this film in the post, I was more than excited to watch what some people had called one of the best direct to DVD Horror films. Until I was contacted by Jack Messitt (Director) I had never heard of Midnight Movie, however, once I received the DVD I did a bit of research and was pleasantly surprised and intrigued with what I read. As well as a great website, this title boasts some impressive accolades and high praise from various outlets.

The film starts with a patient at a psychiatric ward painting. The patient, Ted Radford was a director who forty years ago made a slasher film called The Dark Beneath. At the request of his doctor, he is permitted to watch his film however, something sinister occurs and everyone on the ward except for the doctor vanishes leaving behind only pools of blood and a mystery! The only remnants of Radford, is a few weird symbols and a lot of blood!

Skip forward a few years and we are taken to a cinema setting with a small group of people congregating to watch a screening of The Dark Beneath! A short way into the grainy film, it flashes and unbeknown to the onlookers we are suddenly watching a point of view from within the cinema where one of the workers is in the basement. He is soon dispatched with the killers weapon of choice, a corkscrew of some description! It isn’t long before the previously oblivious spectators realise that something is happening which is beyond their initial comprehension!

Among the patrons is the surviving doctor and a cop who has seemingly devoted his career to solving the mystery surrounding Ted Radford. Between the two of them, they adequately inform the rest of the group of the dangers they face and they realise the daunting fact that maybe, the killer from the movie has somehow set his sights on them!

What impressed me from the outset about Midnight Movie was the production value, despite having a budget of $1Million (source: Wikipedia) the production values were very high indeed. Couple this with a semi-able cast and it all made for a good solid start! While the premise plays with some scale of originality, essentially it’s an old fashioned, by the book slasher film. As with most slashers of this type, the killer dons a costume and Radford’s is no slouch in that department. An impressively creepy skull mask and hillbilly style dungaree’s make this killer stand out from the crowd. 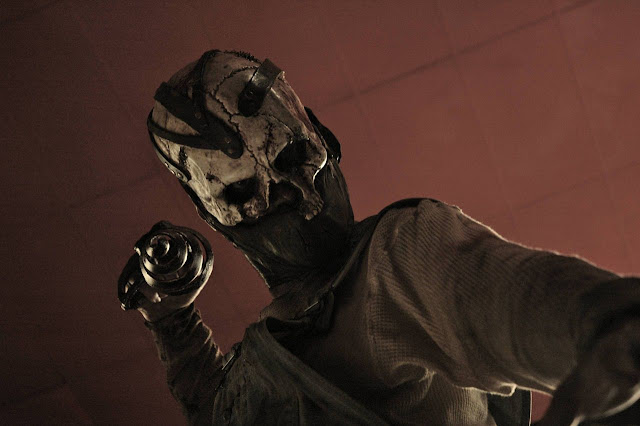 As for that semi-able cast, perhaps, semi-able is perhaps a bit harsh, with the exception of one or two, the acting was very good. With most films of this magnitude, I am normally oblivious to all members of the cast until I do some research but fans of Heroes should instantly recognise Brea Grant (Daphne Millbrook – Speedster) although she has a minor role here, a recognisable face is always a welcome addition. Lead character, Bridgett is very competently played by Rebekah Brandes. Daniel Bonjour who plays her boyfrield Josh is another example of good casting. In a great twist of characterisation, Josh’s polar opposite is ironically his best friend Mario, who is played in his only credited role to date by Greg Cirulnick. An instant dislike is taken to the obnoxious Josh who proves later in the film just how much he is worth! Some comedic value is supplied by Stan Ellsworth who plays Harley, the larger than life biker with an attitude.

On the whole, the cast as well as the characterisation help stand this film out from the crowd of mediocre slasher flicks, of which there are many! An original concept, impressive killer with an equally toe curling weapon really do contribute as well. A few great scenes with some impressive special effects and a compelling atmosphere all make Midnight Movie one of the best Random Horror films I have ever seen, to say I was impressed was a slight understatement and the stand out aspect was its fluidity. At no point throughout this film did I find myself asking the question, “How long left?” which in my line of interest happens more than I care to admit!

I would certainly recommend this film to anyone who likes slasher films as well as supernatural, to see the cross over between the two genres unfold was very interesting. The only disappointing thing about this film has to be the lack of wide exposure and the complete unavailability and ignorance of the UK market to this film. There must be an abundance of films just like this made in America which never make it this far across the Atlantic other than in the hands of a few minor horror specialists (like mine)

Midnight Movie is one of those films which helps cement my belief that there are good low budget independent horror films out there, I just have to find them. I refer to these as my little gems, unfortunately (or not, whichever way you think about it) in my native UK, I would not find this lining the bargain bin. For that reason, I would like to say a huge thank you to Jack Messitt for not only recommending his film but also for sending me a copy.

The film industry is so diluted and overflowing with regurgitated, colourful, big budget remakes that films like this get left behind. For me, this is something of a passion but for others, it’s their lives. If real horror fans want to see something truly original and enjoyable, I implore you to seek out these hidden gems and give them the recognition and praise they so obviously deserve. If we don’t do our bit, they might cease to exist and all we will be left with is boring, unoriginal tripe!