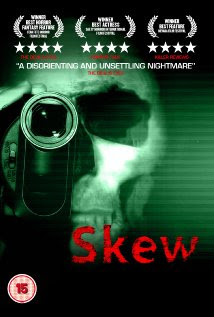 With all the bigger budget horror films I have watched lately, I thought I would mix it up a bit and watch something a bit more low-budget, something more in keeping with the likes of a true random horror. It’s another one that the misses got me for Christmas so I have waited quite a while to watch it but with the amount of DVD’s I have, this is understandable.

First impressions from the case were quite good, it gave me a good idea what the film would entail... Someone filming events using a hand-held camera. I suppose that is fairly close to the mark and in keeping with current trends. The likes of Grave Encounters and Paranormal Activity have really led resurgence in the found footage/Hand-held department after the greats of Cannibal Holocaust and The Blair Witch Project paved the way.

Skew follows Richard, Eva and Simon on a road trip across the country as they travel to a friend’s wedding. Simon has decided that he is going to document every second of the trip and does so with great compassion and determination. As tensions flair throughout the journey, friendships are tested and the three friends must battle not only their own demons but each others as well. The eager Simon maintains his intrusive recording as we learn more about the characters and what they are feeling.

A seemingly innocent stop off at a motel leads to the first in a chain of events that will thrill and entertain. Through the glassy lens of the camera, Simon witnesses a bizarre occurrence. The Motel managers face appears blurred or skewed. He initially disregards it as a glitch but when the man turns up dead, he begins to suspect something. As the story progresses, more and more of these skewed faces plague Simon until eventually the three friends turn on one another!

Skew gives us another original concept using a trusty hand held but where Grave Encounters really impressed, Skew impressed in other ways. A bit more stilted in its delivery perhaps and some scenes could be construed as boring as long single shots of dialogue fill up a lot of space but when something exciting does happen, it makes up for that in spades. 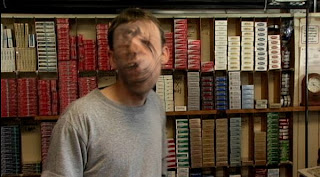 The great thing about watching a film that genuinely looks real is that when you’re witnessing what someone else witnessed firsthand, you constantly find yourself looking in shadows for something hidden. Something that maybe the director wanted us to see but the flow of the film ignored it. I have yet to see a film that utilises this concept to great effect but I look anyway! I think that might contribute to my love for this type of film, even if I never find anything, the fun is in the looking!

Brilliantly acted by a relatively unknown cast and a story that warrants a wider audience, Skew really impressed me from the outset. I must say a special mention for the special effects in this film, while still looking like a cheap handheld, there are moments when I found myself backing it up to watch again just to make sure I saw what I think I saw. This great movie's use of camera trickery and special effects continued to impress me throughout and hopefully others using similar methods will do so for years to come. It is my hope that the found footage genre maintains its level of evolution until hopefully we have something to realistically surpass the greats...

To all reading this, I may not have done this film too much justice there but I can only divulge so much information without breaking my rule of no spoilers, so I suggest you dig into your pockets or empty out your piggy bank, get onto Amazon and buy a copy of Skew. Watch it and enjoy!