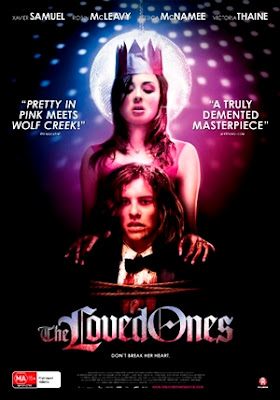 This film was recommended to me a while ago by a friend and I have kept a sharp right eye open for a copy of it ever since. A chance visit to my local DVD retailer offered me the opportunity to pick up a copy for a bargain price so I promptly obliged.

After a quick scan of the cover, I immediately jumped to the conclusion that what I had here was a run of the mill Aussie slasher flick set around a school dance setting…. Oh how wrong I was! Again, from the initial scan, I learned that the Loved Ones starred, and this was something they seemed quite proud of, Xavier Samuel. As they were quite eager to point out, star of Twilight: Eclipse. Having only seen them once (The Misses is a fan) I was still none the wiser but it was obviously quite a selling point for them.

Quite early on in the Loved Ones, I got the feeling that my slasher theory was way off the mark. The film opens with Brent (Samuel) driving along a country road with his Dad, he’s clearly just got his driving licence but not far into their journey a half-naked and bloodied man causes them to swerve off the road and crash. Skip forward a few months and a clearly disgruntled and dishevelled Brent doesn’t really need to tell us that he lost his father in the accident. Gone is the happy go-lucky Brent, replaced by the angry young man we see before us!

The prospect of a school dances causes a loner named Lola to ask Brent to accompany her only to be brushed off because he already has a girlfriend. What Brent fails to realise is that this decision may prove to be more life threatening than he could ever have imagined!

First reactions to this film were how well it was made and secondly how well it was acted! Most notably by Robin McLeavy who plays the hapless Lola. A character and a performance that would be good enough to make any Horror film! Xavier Samuel is more than believable in his portrayal of the guilt ridden teen with seemingly nothing but anger building inside. A good side story involves Brent’s best friend Jamie and his encounter with Mia, another angry young teen whose own story presents itself very well throughout.

To say The Loved Ones shocked me is really under-selling the reaction I had. What I thought it was going to be and what it actually developed into could not have been further afield from one another! Toe-curling, spine tingling and often stomach churning imagery keep you on the edge of your seat as the shy, reserved Lola turns out to be one of the most psychotic on-screen characters I have ever seen!

A gritty, despairing, Misery-esque story that makes you cringe and weep then just when you think you’ve seen it all, something even worse rears its’ head and the cycle starts all over again! If this film doesn’t help you appreciate all you have in life, nothing will…

A brilliant example of Aussie Indie horror up there with Wolf Creek! Very entertaining throughout and a must see for horror fans of any persuasion!