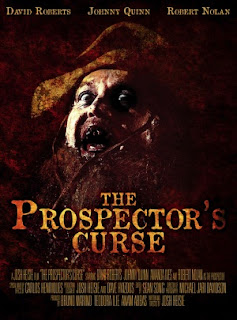 This short film was first brought to my attention by director Josh Heisie way back in February 2012. Due to “unforseen events”, the film missed its initial slated release target of Summer 2012. However, I was recently updated as to the status of the film and I have also had the opportunity to sample the work for myself...

Set in Gold-rush era Wild West, Theodore “Tubby” Ellsworth and Jack smith are two criminals on the run. As they make their escape in the woods, they come across a dying Prospector. Lying on Indian ground and knowing of his impending demise, he makes the pair promise to give him a Christian burial. They fail on their oath, instead opting to steal the old man’s gold. Little do they know, the prospector is about to return to claim what is rightfully his and inflict terrible vengeance on the two naive outlaws!

While I may not hold a massive space in my heart for short films, there are the odd ones that manage to weasel their way into my consciousness. The last such short was the brilliantly sinister and atmospheric Familiar. In what seems to be delevoping into a pattern, the amazing lead from Familiar, Robert Nolan also stars in this bite-sized reel of fun!

Nolan appears as the prospector himself, with just as much gusto and tongue in cheek genius as other antagonists like Freddy Krueger and Chucky.

As I watched the 15 minute short, one of the main things that struck me was the professional feel of the finished article. A lot of work clearly went into making this as good looking as possible and they certainly succeeded in that respect. Further to this, special effects feel almost out of place in a short. Something of this quality more than deserves to be in a feature.

Maybe it’s over the top slapstick approach takes away from the real horror element but when watching, you barely notice. Instead, I found myself sitting up and appreciating the whole experience as a fun-filled romp in the woods complete with some awesome imagery.

On the whole, The Prospectors curse provided me with as much enjoyment as I needed and more than I was expecting. If I have one criticism, Ok, not a criticism, more of a light grumble. The Prospectors Curse more than deserves a feature. At 15 minutes, there was barely enough time to fully enjoy and appreciate all that this film could be.

The Prospector's Curse - Trailer from Josh Heisie on Vimeo.