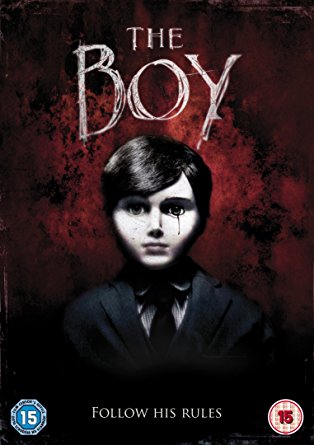 The Boy starts off as seemingly innocent as possible. A young American girl (Greta) is about to start a new job as a nanny in jolly old England. What she doesn’t know is the young boy she is due to care for is actually a life sized doll!

Yep, you heard me. A scary ass life sized pot doll complete with scary eyes, perfect hair and a wardrobe to rival the best of us! The story unfolds that the parents, Mr & Mrs Heelshire, did have a living, breathing son who died over 20 years ago and as a coping mechanism, they got attached to a life sized doll in the young departed boys’ stead.

The Heelshire’s live, as I said in England, in an amazingly sprawling country house. Their daily routines all revolve around caring for the doll child and catering to it’s/his every whim.

Sound strange yet? It should, the Heelshire’s are an old couple now and Mr Heelshire makes his true feelings known to Greta in a quiet setting while emptying the rat traps by admitting that things had gotten out of hand but it would appear to be easier for him to just carry on as is.

Mrs Heelshire on the other hand appears to be 100% convinced that the doll is the embodiment of their son Brahms and sets about explaining his daily routine to Greta. It’s a strict routine which she is adamant is adhered to at all times or Brahms would not like it.

The Heelshire’s set off on their first holiday in decades, much to the apparent delight of Mr Heelshire and so off they go, leaving Greta to care for Brahms. A parting gift from Mrs Heelshire as they leave the house, 2 words.... “I’m Sorry” 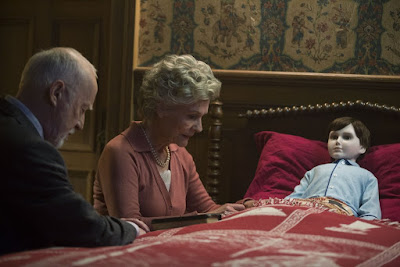 With the Heelshire’s gone and Greta seemingly getting paid to stay all alone in a large country house in England doing not very much at all, she quickly chucks the routine to one side, covers the creepy looking doll with a blanket and does what anyone would do in the same situation, drink the rich people’s wine!

The introduction of Malcolm, the local shop keeper who delivers the weekly groceries to the house, sets up a bit of a love interest and a slight distraction from the edgy and chilling child/doll minding.

As the story progresses we learn a lot about why Greta took up this position, a job so far from home and even more about the tragic story surrounding Brahms’ death, the real one, not the doll variety.

Directed by William Brent Bell who has some pedigree within the walls of this blog having also directed The Devil Within and Stay Alive, The Boy plays out like many psychological thrillers with a few jump scares along the way. Couple that with a very creepy looking pot doll and we have a film that is well worth the 1 hour, 37 minute run time. 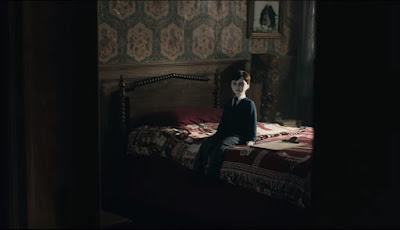 At first glance, The Boy suffers from not really knowing it’s true identity, a few twists take the story and the film itself off on a few tangents but when you sit down after the credits have rolled and dissect it for all that it is, The Boy is a very clever film that does not pretend to be anything other than what it is.

And what it is, is an enjoyable, slow burner of a move which is very well written, directed and acted. Props go out to the main cast of two, Lauren Cohen as Greta the nanny and Rupert Evans as Malcolm because for the majority of the film, it is only these two faces we see... Besides the doll!

I would fully recommend this film to anyone looking for an easy to watch horror mystery on a Random Saturday night, you will hopefully not be disappointed.