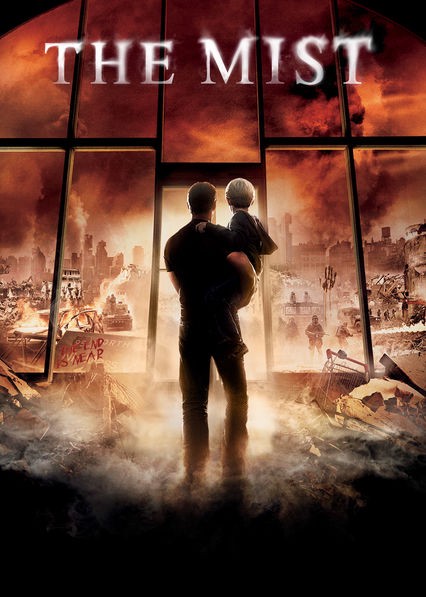 When The Mist was first released in 2007, it was met with a fairly lacklustre critical response. With an opening take of just under $9M in the US, you could be forgiven for thinking this was just another creature feature with little bite!

Overall, according to boxofficemojo, the film has grossed somewhere in the region of $57M worldwide off the back of an $18M budget. It's not a bad take but that does not tell the whole story.

On the surface, the premise seems simple and perhaps formulaic but if you look deeper, you will find something which speaks to the human race in so many ways. It is something which truly hits home and more so at the moment with the uncertain times we all face around the globe, it showcases the best and worst of the human psyche.

The film itself follows a father and Son who find themselves trapped in a local, small town supermarket following a storm which brings in a thick, all-encompassing mist. As the mist begins to engulf everything in its wake, we are left with a broad dynamic of locals, military personnel and “outsiders” who also find themselves trapped.

Needless to say... there is something in the mist! 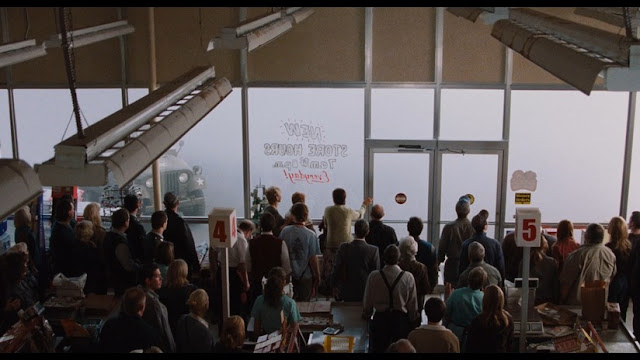 Frank Darabont adapt this Stephen King work which is clearly a combination that has worked before. This one may not have had the mainstream appeal of The Shawshank Redemption or The Green Mile but it certainly packs the same punch for those willing to open their minds to the experience.

Another good connection sees Thomas Jane starring in his second of three Stephen King adaptations (so far), the previous being Dreamcatcher (2003) and the most recent being 1922 (2017).

With a cast including the aforementioned Jane, Marcia Gay Harden, Laurie Holden, Toby Jones and Andre Braugher as well as another Shawshank connection in William Sadler, The Mist always had the potential to be a solid entry. 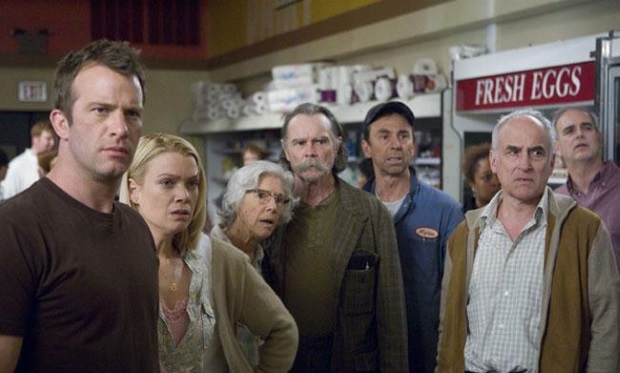 The expectation may have been 2 hours of the same old film we've all seen countless times before, a hapless 'would be' hero saves the day when confronted with an enemy, there's thrills, spills and blood! Sound familiar? I know...

Instead, The Mist gives us an extremely stark and insightful study into the mentality of the Human Race. 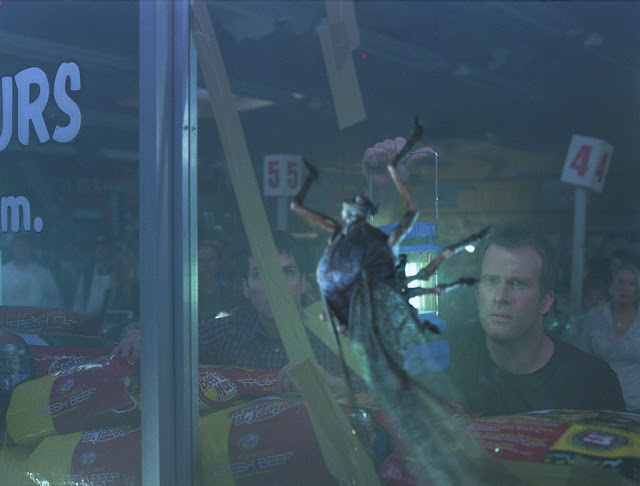 When faced with any form of impending or present doom, the Human race quickly breaks into factions. One being a rational group whose incentive is survival, utilising basic instincts which override any other emotion.

The second, in this instance being the god fearing “doomsdayers”, who believe that this is gods wrath or punishment for the sinful actions of the Human Race. Their salvation takes a more sinister path.

Each group has its de-facto leader, someone to look to in a time of crisis. Thomas Jane as David Drayton takes the mantel for the rationale survivors while his counter part is played with bile inducing brilliance by Marcia Gay Harden whose character Mrs. Carmody revels in the attention her at times extreme beliefs bring. 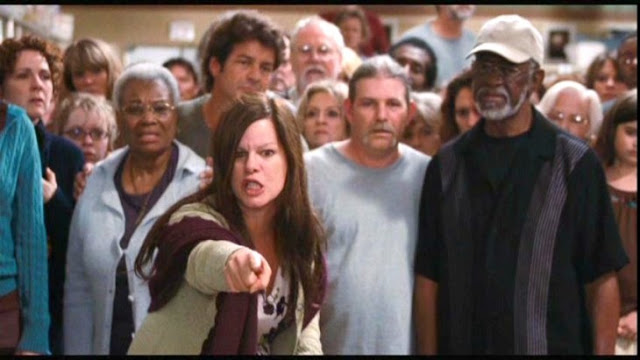 The similarities can be seen in today's world. We face a global pandemic and while I have not heard much to make one believe there are those who think this is “God's wrath”, there are still factions being created. The overwhelming population are doing all they can to keep themselves and others safe while there are some who don't see it that way and are, if somewhat selfishly, ignoring all the scientific evidence and choosing a different path. I will not get any more political here so that is where my line is. Now, back to the film.

The Mist perfectly portrays the juxtaposition of the monster movie as the underlying irony and harsh truth is that the only monster on this planet is the Human Race. There is a very subtle yet poignant line in the film which captures this perfectly..

“As a species we're fundamentally insane. Put more than two of us in a room, we pick sides and start dreaming up reasons to kill one another. Why do you think we invented politics and religion?”

***Spoilers beyond this point***

While those initial expectations of the same old film are somewhat ex-ponged in the first half of the film, the second half really hammers it home. The dynamic has already changed and the groups have already witnessed with their own disbelieving eyes, what is in the mist. Emotions start to fly. A small group decides they need to leave in order to try and outrun the mist and although they don't know if that is even a possibility, the alternative offers a worse fate. The growing number of followers that Mrs Carmody has amassed decides that the only way to get through this is to try to answer to the “higher power” and they have chosen human sacrifice as their form of appeasement. First up is pointing blame squarely at the feet of one of the military survivors who found himself trapped. 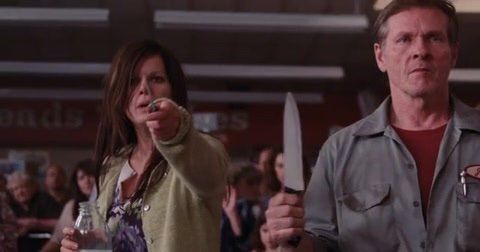 What follows is one of the most infuriating, emotive and shocking endings to any film ever! As the group manages to escape the confines of their supermarket prison after Mrs Carmody's preaching nearly causes her frantic followers to “sacrifice” David's son, Ollie comes to the rescue triumphantly by liberating Mrs Carmody of her life!

The small group who flee the supermarket eventually make their way to David's car but not before a few losses along the way.

The next scene takes us with the survivors on an emotional journey as we embark on a slow and heart wrenching drive through the town in which we learn the fate of David's wife...

As they try to drive out of the mist, car runs out of gas and they slowly grind to a halt. With the impending doom outside the car doors closing in and with the harsh reality that they will all very possibly be eaten alive in an horrific blood bath by the growing number of creatures, they silently agree to take the easy road and allow David to put them all out of their miseries with a gun. 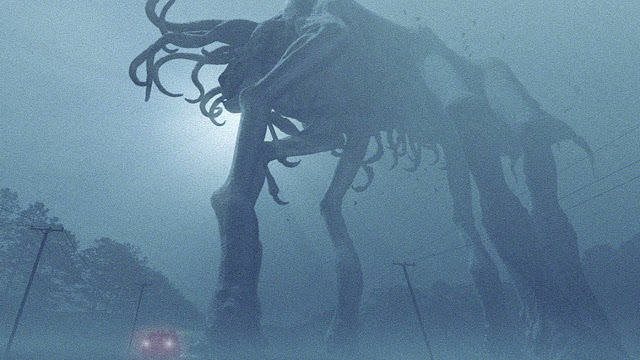 Sadly he has 4 bullets and there are 5 of them. He agrees that he would use the bullets on his unfortunate passengers and he would “figure something out”.

As he pulls the trigger on his son and fellow escapees, his heart breaks and we, as the viewer are transported to the moment his pain hits. As David screams a gut wrenching and harrowing scream at the reality of his actions, we really do feel his pain! 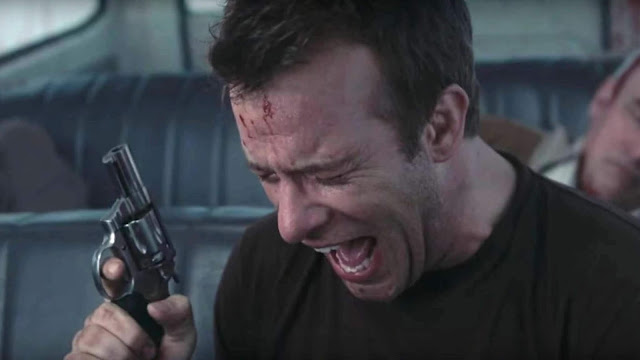 David leaves the car and begs the creatures to come and finish him off, as his shouts and cries go unheard, the mist begins to clear and a huge convoy of military vehicles and personnel approach in one of the most horrific, heartbreaking and hollow endings to any film ever!

There are so many lessons we as a human race can take from this film. Forget the distraction of the monsters and the Sci-fi element. The human element of this film really is interesting. It is made even more interesting when we discover one of the early characters who herself was trapped in the supermarket, had indeed managed to escape the danger. She had begged someone to help her home to her young children who were home alone. No one offered to help... We learn her fate as we see her safe and sound being evacuated by the military along with her children. If a little selflessness had been observed then more people could have survived. Instead, selfishness and fear was the overriding driver and it only lead to death!

All in all, The Mist is a brilliant film with multiple layers of interest and intrigue. Certainly for me, one of the best Stephen King adaptations I have ever seen. You may think it was just another creature feature but I hope that with a little push, you can look beyond all that and view it for what it is. So if you haven't seen it for a while or you have only watched it once and were not a fan, I implore you to give it another viewing perhaps with a more open mind. Please also allow time to get over the ending as it will stay with you...